WILDLIFE ON ICE – ICE HOCKEY, IT’S A CONTACT SPORT!
Ice Hockey, the fastest, and arguably the most exciting, team sport in the world, is played right here in Cape Town at the new Olympic size venue, the Ice Station – Grand West Casino complex.  We cater for all age groups.  The Western Province Ice Hockey Association controls the sport in the Western Cape and has four member clubs.  They are the Sharks, Rams and Eagles and a ladies team called the Devils.  They all play in the WPIHA league from February until October of each year.  The ladies however play as a Devils team against visiting ladies teams and not as Devils in the WPIHA league.

MONDAY AND THURSDAY NIGHT IS HOCKEY NIGHT!
All league games are played on a Monday and Thursday night.  Visit the WPIHA web site http://www.wpicehockey.co.za/ for an update on game schedules and results.  Spectators are welcome at a nominal fee.  Seats are unreserved, so get there early to get the best view of the game.

WESTERN PROVINCE AND SA COLOURS
Every year, more and more players from the Western Province, from under 12 to Seniors and Ladies divisions, are selected to represent their country.  We are affiliated to SA Ice Hockey Association and the International Ice Hockey Association (IIHF).
Imagine having travelled to countries like Bulgaria, Spain, Mexico, Yugoslavia, Iceland, Romania, Czech Republic, Korea and Hungary to play in World Championships and tournaments as they have.  Playing in the snow for the first time, snow boarding and skiing. 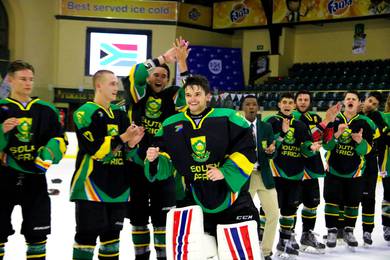 More information regarding the Western Province Ice Hockey Association can be found on their website: http://www.wpicehockey.co.za/

For info on Ice Hockey around South Africa: http://www.saicehockey.org.za

Copyright © 2020 The Ice Station | Maintained by The Hardrive Experience